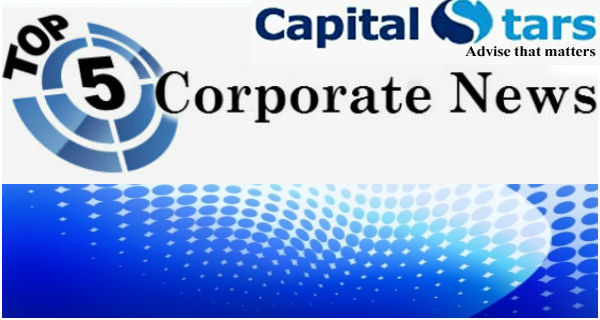 Govt to infuse Rs 2455 cr in Bank of India
Bank of India has announced that the Government of India ( GOI) in its letter dated August 19, 2015 has informed the bank about its decision to infuse capital funds to the tune of Rs2455 crore in the Bank by way of preferential allotment of equity shares. In this regard, the Board of Directors have decided to convene an Extra-Ordinary General Meeting (EGM) of the shareholders of the Bank on September 28, 2015. In the meeting the bank will seek to get the shareholders' approval for the proposed preferential Issue of equity shares to Government of India, by way of Special Resolution.
Hindalco seeks shareholders nod to raise up to Rs 6,000 cr
Aluminium maker Hindalco Industries said that it will seek shareholders' approval to raise up to Rs6,000 crore through issuance of non convertible debentures (NCDs) on private placement basis.
Consent is sought to offer or invite subscription to non convertible debentures up to an amount not exceeding Rs6,000 crore on private placement basis from time to time until September 15, 2016,' Hindalco said.Hindalco said its Board will consider raising funds in one or more series/ tranches. The company's AGM will be held on September 16.
Bharti plans to sell Bangladesh and Srilankan operations
Bharti Airtel is looking to exit operations of the Bangladesh and Srilanka market. It is further learnt that it would separately sell the tower business and the services business.
This move is aimed at focusing operations and consolidating the balance sheet and hence serves positive for the company.